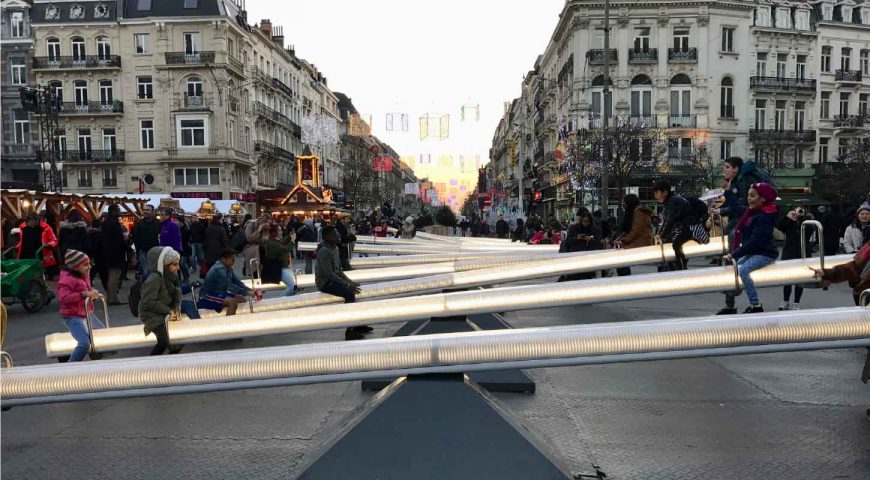 As the capital of Belgium, the city of Brussels is a major hub for the country as well as the entire European Union. It would be easy to spend your entire city trip exploring what Brussels has to offer. Bustling outdoor markets, a stunning royal palace and more than a dozen fantastic museums set the scene, and a variety of breweries and shops ensure nonstop enjoyment. While visiting Brussels, don’t forget to soak up the culture outside of the city. These day trips from Brussels throughout Belgium, as well as the neighboring countries, are a wonderful way to see Europe.

Located northwest of Brussels, Bruges is a picture-perfect town that looks like it could still be living in the past. Largely pedestrian, this is a city that is best explored on foot. Bruges is essentially surrounded by a circular canal, so it is easy to find your way around, and you’ll always be close to some water views. The central plaza, known as the Grote Markt, is home to the famous belfry. You can climb to its top, and be rewarded with amazing views, if you’re up for a climb of 366 steps.

North of Brussels is Ghent, a city with a unique blend of history and modern sophistication. In the middle ages, Ghent was a major hub, and that influence is clear when walking through Ghent and admiring the architecture. Ghent is best known for the beautiful 15th century Ghent Altarpiece, or Adoration of the Mystic Lamb, painted by van Eyck. Today, that marvelous piece of art is located in Sint-Baafskathedraal, or St. Bavo’s Cathedral. Canal cruises are also incredibly popular in Ghent, and a short one can be a fantastic way to see more of the city on a single day trip from Brussels.

Just two hours of driving southeast of Brussels will bring you across the border into Luxembourg. The capital, Luxembourg City, is divided into different districts. If you’re interested in medieval architecture, most of it will be concentrated in the High City, or Ville Haute. Be sure to check out the Bock, a series of natural fortifications constructed in the 10th century that still stand and were designed to protect the city from invasion. For something a little more modern, the contemporary Musée d’Art Moderne Grand-Duc Jean, known to locals at MUDAM, is packed with modern art.

Getting to Luxembourg City

Due east of Brussels is the Dutch province of Limburg, where you’ll be able to explore the city of Maastricht. The city is a true melting pot, thanks to its location just a few miles from both Germany and Belgium. Strolling around Maastricht, be sure to check out the two major plazas: The Markt and the Vrijthof. In addition to the historic architecture and the world-class museums, you might be intrigued by the Saint Pietersberg Caves. These caves were dug as shelters is centuries past, and during the Second World War famed artwork was stored underground in them for safekeeping.

A short 45-minute train ride or car journey north of Brussels takes you to Antwerp, a city known as the hub of trade and economy in Belgium. Antwerp is a place with a thriving fashion industry and a major diamond trade, but there are plenty of culture attractions as well. If you’re an art fan, make time to see the Rubenshuis, where Baroque painter Rubens once lived, as well as the Koninklijk Museum voor Schone Kunsten, or fine arts museum. If you’re in the market for souvenirs, the Meir is one of the busiest shopping destinations in all of Belgium.

Dinant is located on the banks of the River Meuse in the French speaking region of Wallonia, and its main attraction is the striking Citadel of Dinant. The citadel was constructed in the 19th century on the cliffs overlooking the river, and it provides sweeping views of the landscape below. To reach the Citadel of Dinant, you need to climb several hundred steps carved into the cliffs or take a cable car. Once you’re there, take the time to view the attached museum, which boasts medieval arms as well as interesting art from the region.

The Dutch capital is a fascinating city with incredible scenic beauty. Nicknamed Venice of the North, Amsterdam boasts lots of canals that provide waterfront views from throughout the city. If you’re just there for the day, spend it in the medieval city center. This part of Amsterdam is home to the 17th century Royal Palace as well as the former home of painter Rembrandt van Rijn. Don’t miss the slightly touristy but undeniably beautiful floating flower market that takes place every day on the waters of the Singel Canal

Even if you’re not a serious history buff, you’ve probably heard of the Battle of Waterloo. It was at this historic site that Napoleon lost his final battle against the Duke of Wellington. You can visit the exact site of this epic defeat from 1815 today. The spot is marked clearly with an artificial hill and known as the Lion’s Mound. Climb the steps to the top of the mound itself, admire the lion sculpture and take in the 360 degree views of the entire battlefield. Re-enactments are usually held on the weekend nearest the battle’s anniversary (18 June).

Located west of Brussels, Tournai has a unique history, and it includes a brief period of time when it was under British rule. Today, many visitors head to Tournai to see the magnificent cathedral. Make your way to the belfry in order to view the entire city center below. Much of the architecture surrounding the cathedral is from the 12th and 13th century, so even a brief self-guided tour can be a wonderful medieval experience. The Museum of Fine Arts is vastly underrated and contains works by the likes of Rubens, Monet and Van Gogh.